Back in March, I posted a blog entry about the new AT&T MicroCell. This unit acts like a mini cell tower in your home or small business. It works through your broadband DSL or Cable internet service and it then connects to AT&T’s network. It sells for $150. I also commented on the opinion of some (including me) that we shouldn’t need to be buying one of these and AT&T should be providing better and stronger coverage for their network. But, at least it’s a one-time only expense with no monthly charges (except if you choose the unlimited calls option).

The MicroCell became available in my area very recently and I decided to go for it and buy one. Buying it was easy, just go to the AT&T store locally. Installing it should be easy, but, for me it wasn’t. When I got it home, I had to register its serial number at AT&T’s MicroCell website. But the website would not accept my serial number. I spent 2 unsuccessful hours on the phone with AT&T Support and 2 more hours back at the store and they gave up but promised to follow up and they refunded my purchase price. Bottom line, the next evening (iPhone release day) I tried to enter that same serial number (I had it written down) and it was accepted by the website. But I cancelled the registration as I no longer had the unit. The next morning, yesterday, I went back to the store and re-purchased and registered the new unit there. It must have been some glitch in the website that got fixed in the interim.

The results are shown below and are pretty self-explanatory:

These images were taken from the same location in my house. Usually I only get one bar in this spot. This time there were two before installing the MicroCell (on the left): 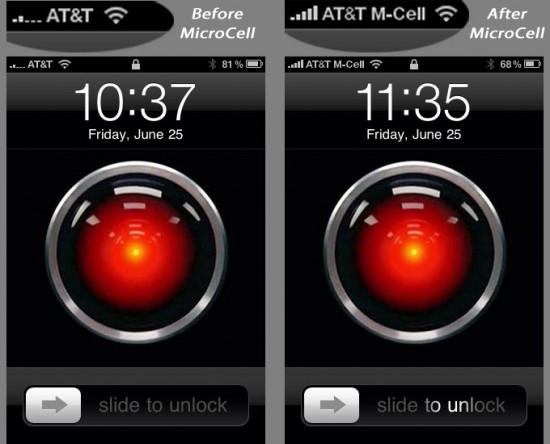 AT&T signal strength before and after installing the MicroCell. - Click to enlarge