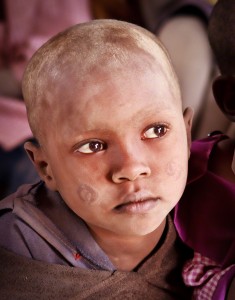 I’ve created a slideshow of the school children of Amboseli School in Amboseli National Park, Kenya. While on our wonderful trip to Kenya and Tanzania in July 2009, our guide took us to a school in a Maasai village. It was a single classroom with young, primary school age children. We were given permission to photograph them, which I was very happy to be able to do. In the classroom there were no desks, only benches for the children to sit on facing the teacher. There were blackboards on the wall and the room was only lit by the light entering through the open windows.

The children were beautiful and there were a few obvious things about their appearance. First, most of them were covered (head to foot) with a white-grey dust. When we looked into what that was, we found that it was from playing outside in the dirt which contained a lot of volcanic ash from Mount Kilimanjaro as well as salty soda from nearby dry lakes. They were experiencing a draught during the time we were there. We also discovered that the name of the area, Amboseli may have come from the word “Empusel” which means “salty, dusty place” in the traditional Maasai language of Maa.

Please click the button to see these amazing children: